I had a call this morning from someone with a facelift Porsche 996 and wondering if he should put another £15,000 in and upgrade to a Porsche 997.

That’s a tricky one. The Porsche 997 was based on the 996 and used essentially the same engine, transmission, bodyshell and suspension, but wrapped up in what many people consider to be a more attractive package.

Of course the 997 is the better car – it’s a newer model – but is it so much better as to warrant putting in a fair chunk of money to upgrade to? If you’re being totally logical and sensible about it then the answer has to be no. The advantages are small and, financially, you’re going to lose out as the 997 is bound to depreciate over the next three years, whereas the 996 has done much of its depreciating. However, Porsche ownership isn’t always about being sensible, it’s about doing what you feel passionate about, and if a 997 is what you yearn for, then that’s what you should buy.

• More traditional 911 lines. I happen to like the look of the 996 but many people prefer the 997, arguing that it looks more like the classic 993.

• Better interior. Now, I’m not convinced the 997’s cockpit is any better made than the 996’s and 997s can get scruffy inside. However, again, people do like the way the 997 harks back to the classic 997 dashboard look.

• More power. Certainly in 3.8-litre Carrera S form, you can feel the difference, especially in the mid-range. The standard 3.6-litre Carrera, on the other hand, has a similar power to the last of the 996s.

• Improved handling. Now, there’s nothing wrong with the way a 996 takes the bends, but the 997 does it better, and many have the advantage of PASM. The 996 handles well but the 997 is even more exciting to drive.

Sometimes it’s best not to sell your Porsche

I’ve just had a phone conversation with a chap wanting to know what his early Porsche 997 Carrera S was worth. It’s hard to give

I’m a great fan of the Porsche 964 series and, in particular, enjoy the rare 964 Anniversary, a special edition built to celebrate 30 years 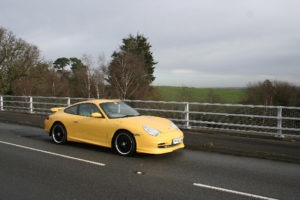 Do you want to sell your Porsche?

Recent sales success means that we are actively looking for new stock. And, being a broker that means that, rather than buy your Porsche at