We’ve had several Porsche Caymans in stock recently and it’s been great getting reacquainted with such a great car.

The Cayman was introduced in 2006 and was essentially a Boxster with a fixed roof and hatchback. However, to describe it like that would be to do the Cayman an injustice. The stiffer bodyshell created by the steel roof meant that Porsche could endow the coupe with stiffer suspension settings to make the Cayman a better-handling car.

It was initially offered in two guises. First on the market was the S which was powered by a mid-mounted 3.4-litre, flat-six boxer engine derived from the 3.2 litre Boxster powerplant with cylinder heads from the 997 S’s 3.8-litre engine. The power is fed through a six-speed manual Getrag 466 gearbox, while a five-speed Tiptronic transmission was optional.

Hot on its heels, the entry-level Cayman is powered by a 2.7-litre unit, again based on the Boxster powerplant. This produces 245bhp and gives the car good performance. Unlike the S’s six-speed gearbox, the original Cayman has a five-speed transmission, while Tiptronic was an option.

Today, these early Caymans are remarkably good value for money, with prices of decent examples starting at around £16,000 for an early car with good history and reasonable mileage. That’s several thousand Pounds less than a Porsche 997 from the same period and in the same condition. And that alone makes a Cayman a tempting prospect.

OK, you don’t get rear seats but then few 911 owners make use of those anyway. What you do get, though, is superb mid-engined handling which is remarkably neutral and predictable, a useful lifting rear hatch (plus a second luggage space at the front – how many sports cars can boast two boots and a hatchback?), and an interior which, while lifted from the Boxster, is on a par with that of the 997 in terms of quality and comfort.

Don’t ignore the 2.7-litre entry-level car, either. Sure, the S has more grunt but its little brother has an eager little engine that makes it a hoot to drive, and prices are even keener.

As much as I love 911s, I am becoming increasingly fond of the Cayman. For buyers on a budget it makes so much more sense than a 997, and you certainly wouldn’t feel shortchanged owning and driving one. 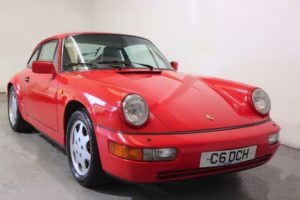 I often get people asking me if they can use an older Porsche as an everyday car. Before answering yes or no, I chat with 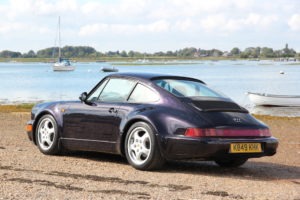 We have a customer looking for a Porsche 964 Anniversary. It’s a sad story – he had an Anniversary that he loved but it got