I was chatting to a friend recently about watches and the subject of the Porsche PDO1 watch came up. Now, I’m not a fan of Porsche Design’s more recent watches but its first offering, the PD01 (Porsche Design 01) or Porsche Design Chronograph 1, is subtly understated and a design classic. My friend Kevin Yeung owns a PD01 and has written the following review of the watch. I hope you enjoy it!

What is the most important motorsport watch yet to become a cult classic? My good friend Peter Chang posed this excellent question over lunch. I didn’t have a clue but relished the challenge to answer it.

Over the years I have quietly collected wristwatches; I believe that watches are intensely personal items that convey a person’s sense of style and values. Being brand agnostic, my assemblage reflects my obsession with watches that possess unequivocal horological merit from undisputable provenience. I cherish watches that clearly convey purity of purpose and are effortlessly stylish.

Motorsport-inspired wristwatches evoke a seductive mix; connecting heroism, speed and style. Many of us find ourselves enamoured by the whole racing and sports car scene; and watchmakers have paid attention. It seems every month we are pitched yet another hoard of motorsport-inspired watches. Many of these ignominious offerings shamelessly capitalise on whatever shreds of automotive evocation or association watchmakers can muster. Disappointingly, with very few exceptions, I find these abhorrent ‘limited editions’ to be little more than ostentatiously oversized, excessively gimmicky timepieces.

Hence my watch collection is almost completely divorced from my car collection. For years the only crossovers have been my Patek Philippe Calatrava 6000G calibre 240 PS C and my stainless-steel black Rolex Daytona calibre 4130. Incidentally, both were purchased purely based on my reverence towards their bespoke movements.

So to help properly answer Peter’s question, I enlisted my childhood friend Jamie Yu, who is an important collector with over 400 notable wristwatches that (as I later learned) include essentially all the most iconic motorsport-inspired watches. Jamie’s experience and knowledge have enabled him to identify watches with high potential and he has consistently picked winners for his collection over the years. I also invited my good friend Leo Tam, a car enthusiast, knowledgeable chronograph expert and amateur watchmaker, to add valuable input from a technical perspective.

Armed with a mountain of binders detailing important watches offered at significant auctions over the past 10 years, coupled with total access to Jamie’s collection, together we generated a comprehensive ‘long list’ consisting of 110 class-leading chronograph watches dating from the early 1960s to the present. We decided not to consider watches based purely on horological merit as demanded by connoisseurs in haute horlogerie. Instead, we focused on uncovering the coolest and most significant motorsport watch yet to become an icon.

In no time, we narrowed our focus to watches manufactured between the mid 1960s to the early 1980s. Collectively, we felt these watches, designed during the ‘golden decades’ of motorsport, were bold in design but incredibly well proportioned and not bulky like many of today’s offering. Just as importantly, they have also endured the test of time. No wonder many are immensely sought after today. The most established classics are the Rolex Daytona ‘Paul Newman’ (ref 6239) and the blue-dialled Heuer Monaco (ref 1133B) made famous by Steve McQueen in the film Le Mans. Both these watches were powered by mildly modified Valjoux 7750 movements; Leo shared that, from a horological perspective, it is enthralling to note that the evergreen Valjoux 7750 movement is still alive and well and remains commonly used today on many modern sports watches.

Following fierce debates over the merits of a number of watches on our list, one particular watch kept coming back into every conversation concerning importance, provenience and pedigree. It became our clear winner and once we factored in its value – it won by a country mile with Jamie claiming that “This watch’s potential is enormous!”

Ferdinand Alexander ‘Butzi’ Porsche, father of the Porsche 911 once shared “A good idea is often surprisingly simple.” In 1972, he left Porsche to establish his own design studio in Stuttgart Germany, relocating it two years later to Zell am See in Austria. He named it Porsche Design and launched his first product, following his now iconic 911 – the Porsche Design Chronograph 1, Chrono 1, or simply PD01. Its race-to-wrist motorsport DNA was apparent everywhere as the watch captured the 911’s rich pedigree perfectly.

Porsche tasked Swiss military watchmaker Orfina to manufacture a tough case and bracelet to his exact specifications and then treat them to a matte-black physical vapour deposition (PVD) coating. PVD is a process that transfers paint atom by atom from a solid to a vapour phase and back to a solid phase. This process gradually builds a tough layer of paint that remains significantly more resilient to scratching, peeling and erosion than regular paint applications.

Orfina, being a military watch supplier, turned to its expertise and treated the cases and bracelets to a process then only used on military-specification helicopter blades. Following their successful collaboration, the world’s first black PVD watch was born.

This sophisticated but slightly menacing all-black chronograph was launched with a modified version of the Valjoux 7750 movement but Porsche quickly switched to the incredibly robust Lemania 5100 two years later in 1974. The reason being that Porsche Design, with the help of Orfina began to compete for military contracts, and the 5100 movement met the military’s strict requirements.

The 5100 was the only chronograph movement at the time that could withstand large shocks without affecting its function. This was because its mechanism is driven directly, unlike the Valjoux 7750 and others that employed an intermediate wheel. This enabled the 5100 to easily withstand acceleration in excess of 7G without appreciable loss of accuracy. The 5100 also maintained accuracy over long periods without servicing, which was also appealing for military applications. This enabled Porsche Design to win a number of coveted military contracts to supply the watch to NATO, the Royal Navy, Swiss Air Force, UAE Air Force, US Air Force, and the Venezuelan Ministry of Defence.

The most famous contract was for serving the US Air Force. Hollywood’s leading producer Jerry Bruckheimer’s keen attention to details is legendary and he requested that actor Tom Cruise wear a military spec PD01 in his breakthrough role playing Lieutenant Pete ‘Maverick’ Mitchell, a combat aviator in Top Gun.

The Porsche Design Chronograph 1 remains the original ‘Top Gun watch’, not only because it was worn by Tom Cruise in the hit movie, but far more importantly because it was issued by the United States Government to military aviators. Note that any equipment that is not specifically procured and issued by a Government as standard equipment to military personnel but is simply marketed as having an ‘association with them’ are merely marketing gimmicks.

Iconic fashion designer Ralph Lauren is the world’s most accomplished car and watch collector. He once said: “I was in Milan on Via Manzoni and I saw this matte-black watch that I loved; it was an old Porsche Design Chrono 1 watch. I thought I was dreaming when I bought it. And when I got this watch, I then designed matt-black luggage. I loved the utility of it. And that watch was what made me go from a Morgan to a black Porsche Turbo.”

Ferdinand Porsche has designed all of the things motorsport enthusiasts consider important. Over the past 30 years Porsche Design has won numerous prizes and accolades for its innovations. Many of these designs have become classics and are displayed in museums around the world. And it all started with this watch, the Porsche Design Chronograph 1.

I shared my conclusion with Peter a few weeks later and, much to my surprise and delight, he presented an immaculate example to me as a birthday present. By then Leo, had also secured himself not one but two Porsche Design Chronograph 1s – collecting both the Valjoux 7750 and Lemania 5100 movements. Jamie, being the irrefutable connoisseur, already owned four examples in his collection, including both civilian versions along with two military versions, and he is still hoping to add more.

Based from our findings, then, in terms of collectability at their current price levels (between euro 500 to 3,000) the Porsche Design Chronograph 1 represents exceptional value. Designed by genuine motorsport royalty this watch is poised to appreciate aggressively in value as more enthusiasts recognise its natural role as one of the all-time greats. Bear in mind that the now iconic ‘Paul Newman’ Rolex Daytona failed to sell when it was new and struggled to find value until later on in life. Even until the early 1990s, it was still relatively unknown outside of the US and could be purchased for less than US$2,000 in secondhand watch stores across Europe. These watches now regularly trade in excess of US$90,000. Another example is original Panerai watches which traded for less than euro 500 before 1993 when Panerai enthusiast Angelo Bonati launched Officine Panerai and started to market the brand aggressively.

Like all Porsche products, the Porsche Design Chronograph 1 was built to be used every day and can be found if you search carefully or speak to experts. If you cannot find an original Chronograph 1, Porsche Design recently introduced its Heritage P6510 inspired by the original, this is readily available and offers a modern interpretation to the original.

But to me the original Porsche Design Chronograph 1 is the one to have. Essentially, it is the Porsche 964RS of wristwatches. Few people understood them when they were conceived but they have redeemed themselves with a vengeance later in life to become cult classics.

There are only two types of products; things that lose their lustre once used and things that actually become more stunning over time and with use. Like the most beautiful vintage sports cars, this special watch gloriously nods to the later.

PrevPreviousWhy the glass-roofed 911 Targas are great
NextFuel is dropping in price, so buy a Porsche!Next 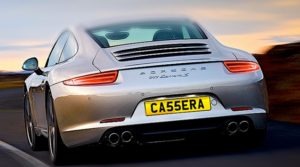 I can’t see why you’d want the numberplate “Cassera” but if you do, it’s yours for just £19,995. You could buy yourself a Carrera for

Looking through our stock, it occurred to me that Porsche has produced some very diverse cars over the years, and we have three examples that

I was sorting through some photos when I came across this, which brought back happy memories. It’s a 2006 Porsche 997 Carrera which I drove