The Porsche Cayman is full of surprises

The new Porsche Cayman is here and there are no surprises on the styling front – it is, after all, essentially a Boxster with a roof, and none the worse for it.

What perhaps is surprising is that Porsche has bothered to continue the Cayman at all, as it’s never been as big a seller as expected. That’s odd, as it’s a dynamically sharp car (if the Boxster is anything to go by, the new one will be brilliant), looks great, undercuts the 911 in price and has a handy lifting rear hatch.

Also surprising is that Porsche is offering, as an option, Adaptive Cruise Control and a Burmester sound system; both of which seem at odds with the Cayman as a focussed sports car.

If you’re in the market for a used Porsche Cayman, they are surprisingly  good value with prices start at £15,000 for an early (2006) car.

Maybe not so surprising, for a car of that age but what is strange is the fact that most Caymans on the market have refreshingly low mileages, with the majority being under 50,000 and cars in the 20,000s are not unusual. And the good news is, you don’t seem to have to pay a premium for a low-mileage example. I don’t like the term ‘future classic’ but the Cayman is on track for that status far more than a contemporary Boxster. If you’ve not considered one before – new or used – now’s the time to do so. You’ll be pleasantly surprised.

The new Porsche Cayman in detail

Porsche AG is celebrating the world premiere of the new Cayman at the 2012 Los Angeles Auto Show. The third generation of the Porsche Cayman has been completely new developed. It is lower and longer, lighter and faster, more efficient and more powerful than ever. A longer wheelbase, wider track and larger wheels enhance the driving performance of the mid-engine sports car to a level without equal in its competitive class. The new two-seater is – after the 911 Carrera and Boxster – the third sports car model line from Porsche to feature innovative lightweight body design. The new Cayman is up to 30 kg lighter, depending on the specific model and equipment, and it consumes up to 15 per cent less fuel per 100 km than the previous model – despite higher engine and driving performance.

The new generation of the two-seat mid-engine sports car is debuting in two classic Porsche versions: the Cayman and the Cayman S. The base model is powered by a 2.7-liter flat six-cylinder engine with 275 hp (202 kW). It accelerates from zero to 100 km/h in 5.4 seconds, depending on the equipment, and reaches a top speed of 266 km/h. Its NEDC fuel consumption lies between 7.7 l/100 km and 8.2 l/100 km, depending on the selected transmission.

Both sport coupés are equipped with standard manual six-speed transmission. The seven-speed Porsche Doppelkupplungsgetriebe (PDK) can be delivered as an option; it enables faster acceleration and better fuel economy.

Porsche is also upgrading the Cayman with new optional features. For example, the sport coupé is now available with Adaptive Cruise Control (ACC) for the first time, which controls the distance to the car ahead in traffic and vehicle speed, as well as a specially developed Burmester sound system. Another new feature for the Cayman is the keyless Entry & Drive system, which is available as an option.

Design: new proportions, prominent lines
The new PorscheCayman is more distinctive than ever. Its proportions are new, and yet it is clearly a Porsche sport coupé; an extended wheelbase with shorter overhangs and 18- and 19-inch diameter wheels with larger rolling circumference are identifying visual characteristics of the car’s more enhanced driving performance. Its styling is marked by precise lines and razor-sharp sculpted edges. They emphasise the car’s low, extended silhouette with the windscreen shifted forward and the roof line that reaches far back. Especially expressive and characteristic are the dynamic recesses in the doors, which guide induction air into the distinctive air scoops on the rear side panels and then directly to the engine. This offers the most prominent visualisation of the concept of a mid-engine car.

From the front end, the new Cayman is marked by its dominant cooling air inlets, which increase in size towards the sides of the car. Just as unique to the new generation of the sport coupé are the large, low rear lid made of aluminium and the rear section with its wrap-around edges. Mounted directly to the rear lid is the thin blade of the rear spoiler, which – in contrast to that of the Boxster – is higher and deploys at a steeper angle. The overall appearance of the Porsche Cayman is more independent than before, and it is well-differentiated from the previous model.

When I was fresh-faced and new to  motoring journalism, the first press car from Porsche I ever drove was a red 944 S2 Cabriolet, with

With the lovely summer weather we’ve been having in England, it’s nice to have a brace of 987  Boxsters in stock. One is a 3.2-litre 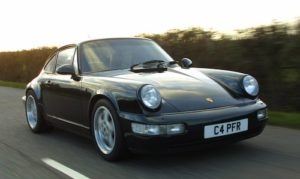 Collecting my first Porsche 964 from Germany, back in 2002

I’ve just received a lovely email from a long-term reader, who said he remembers well a piece I wrote in 2002 for 911 & Porsche