I’m not keen on buying Porsches at auctions. I’d much rather deal with an individual – private or dealer – who knows the car and can let me test drive it.

I looked at a 911 Cabriolet at auction recently that was particularly disappointing.

It was advertised as a 1985 3.0-litre 911 which immediately puzzled me – at that age, it should be 3.2-litres. When I saw the car, it didn’t take long to realise that it was, in fact, a 911SC – the rear badging and the engine were giveaways. A flick through the documentation showed that it was a 1982 car that had been first registered in the UK in 1985. I couldn’t determine where the car had been before that, because the service book and options label under the bonnet were both missing, although the drivers’ manual was in German (it was a right-hand drive car, though).

Further delving into the paperwork showed that the V5 document registered the car as being orange, although I could see it was now Grand Prix White. The previous owner had obviously not informed the DVLA of this.

The paintwork was of a good standard but very fresh – worryingly so. The auction house said that the car had recently had a full body restoration, which can be good news, but there was no paperwork to show what work had been done, which was bad news. More worrying was the black underseal painted around inside of the luggage compartment, plus evidence of welding work in the base of this area (I could see all this easily, as the spare wheel and tool kit were both missing) The same black gunk lined the engine bay.

Later-style Cup wheels and mirrors weren’t my taste for a car this age, but I know some people like them.

Opening the doors, they  scraped against the catches; possibly suggesting that the entire body was out of wack – common with a Cabriolet if the sills have lost their strength and/or have not been repaired correctly.

Inside, the dash and door tops had been retrimmed – to a high standard, granted – with perforated leather. Trendy, perhaps, but not right on a car of this age. The doors had been treated to RS-style pulls and simple metal grab handles, while four out of five dials had white bezels. The carpet was new but not to original standard and – most worryingly – had been effectively glued to the floor so I couldn’t see the condition of the metal below.

Also inside, I found the foglight switch lying loose in the glovebox, while the heater controller felt as if it wasn’t connected.

Finally, underneath the engine, one of the oil-pipe unions was leaking enthusiastically.

So, all in all, not one of the best Porsches I’ve seen, despite a glowing description in the auction catalogue. The guide price was £10,000 to £13,000; it finally sold for £9400 which I think is still too much for a car with such a dodgy provenance.

The key thing here is that there is nothing I found that no one else could have spotted, and it just shows that it pays to be careful when buying any secondhand car, especially a Porsche. 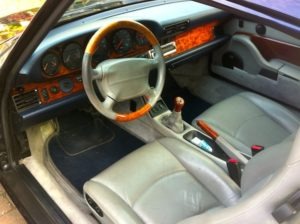 Should Porsches have wooden interiors?

I was sifting through some old photos today when I came across this shot of the interior of a Porsche 993. Nothing unusual in that, 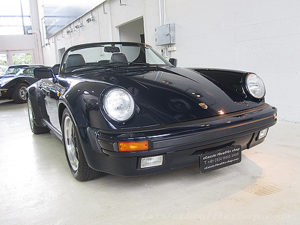 A friend sent me a link to an advert for a 1989 Porsche 911 Speedster which is for sale in Australia. Now, any 911 Speedster 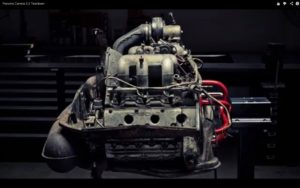 Every wondered what’s involved in tearing down a Porsche 911 engine? This great video gives you a speeded up glimpse of the process. It’s well