How to use climate control

Since the advent of the Porsche 996 in the late 1990s, modern Porsches have had climate control. However, even today, many people don’t understand how to use it properly.

There’s a clue in the name – climate control. The system controls the temperature in the car for you. Sensors measure the cabin air and adjust the heat, fans and air-conditioning to ensure that you are comfortably cosseted.

I set my climate control to 20 degrees Celsius and that’s comfortable for me, although some people will want it slightly higher or lower, but somewhere around that ballpark figure is good. The trick then is to press the ‘Auto’ button and leave the system to do its own thing.

When you get in the car on a cold winter’s morning, there’s no point whatsoever in cranking the temperature up to maximum. The engine won’t be generating any heat for starters and, even when it does, the heater will initially blast out a high temperature to ensure that the cabin reaches your desired 20 degrees before backing off to maintain that level. Turning the temperature up higher will just mean that the cabin gets too hot.

It’s exactly the same in the summer; leave the temperature at 20 degrees, or whatever suits you, rather than setting it to Low in an attempt to get the cabin to cool quicker – it won’t. If the system senses that the cabin is hot, it will automatically blow the coldest air possible into the car until the temperature has cooled, when it will then back off and then quietly maintain your optimal temperature for you to be comfortable.

There’s no point in messing around with the settings, when the automatic mode will do  it all for you.

Keep the windows and sunroof closed, too. In the summer, running the air-con with the windows open means that it is desperately trying, and failing, to cool the outside air, rather than just that in the car. And in the winter, of course, the heater will be trying to warm the surrounding air!

Also, leave the air-conditioning running all year round (which it will be when the Auto button is pressed). Not only will then allow the climate control to work correctly, it also dries the air to help stop the window misting up in winter. More importantly, the air-con gas contains a lubrication so it’s important to keep it circulating to maintain the mechanism. Incidentally, modern air-con systems are very efficient and have a negligible effect on fuel consumption.

Finally, if the air-conditioning stops working it’s probably because the gas has leaked out. A regas alone rarely fixes the issues because the old gas must have seeped out from somewhere so the fault has to be found and rectified before regassing. An air-con engineer once pointed out that you don’t regas your fridge every year, and you shouldn’t have to with your car if everything is, well, gas-tight.

PrevPreviousA Porsche’s previous owner has been in touch
NextPorscheness – what makes a Porsche feel like a Porsche?Next 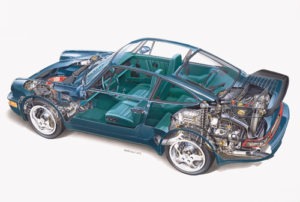 What’s the inside story on this Porsche 964 Turbo?

An overseas customer is looking for details of an unusual Porsche 964 Turbo which was exported from the UK in 2006. Before this, it appears 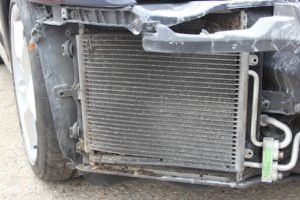 I was in the workshop yesterday and there was a Porsche 996 in to have the air-conditioning condensers replaced because they were corroded. This is

I don’t know about you, but I always like to see Porsches with unusual colour schemes, inside and out. I guess I’m a bit of