Switching from left to right

A 993 for under £15,000 is unusual so an advert for the car above caught my attention. Prices of 993s, perhaps more than for any other 911, are very sensitive to mileage – buyers want low-mileage examples and very high mileage cars are worth less. Therefore, my first thought was that this must be a high mileage car, and I was right – 143,000.

Now, 993s are tough cookies and, if one has been well looked after, there’s no reason to be scared of big miles and it can be a great way of getting a cheap Porsche.

However, this car has another reason for being cheap – it used to be left-hand drive and was converted to right in 2001.

I’ve long had an interest in moving steering wheels across cars. When I was a teenager I converted a Triumph TR7 from left to right-hand drive, on the road outside my house over a half-term holiday. It wasn’t that difficult although, for some reason, the wipers were never 100 percent right after I’d switched them over. I used parts from scrap cars (plenty of TR7s at the breakers!) and more than a little ingenuity.

Moving on a few years, one of the very first Porsche features I wrote was about a then-current 993 Turbo that a specialist was converting from left to right steering. I turned up at his workshop on the second day of the project to find the dash out, wires everywhere and the mechanic scratching his head saying “I wish I’d never started this…”

He knew his stuff, though, and completed the job, at a cost of some £15,000 to the owner. Yes, £15,000. That was for a car which would have then been worth about £60,000 and it was – just about – worth doing, in that it was cheaper than buying a UK-spec Turbo. I thought at the time, though, that the car would always be worth less than a genuine right hooker.

My next memorable meeting with a conversion was when I visited another specialist and they just happened to have a 968 in for servicing and, again, the mechanics were shaking their heads. They’d spotted that the car had been very badly converted from left to right-hand drive and showed me evidence of shoddy welding around the bulkhead and some dodgy wiring. The car had just been bought by an unsuspecting person who’d brought it in for routine servicing and would now face a big bill to make it roadworthy.

So it was with all this in mind that I thought about this 993. Now, I hope that the conversion has been done properly but do know what this entails, in terms of time and cost, and I assume if it’s been bodged the seller wouldn’t be so upfront in revealing the car’s history!

My main concern about buying such a car is that, when the time comes to sell, it will always be worth less than a genuine right-hooker. Which means you have to buy at the right price. Without seeing this car in the flesh, it’s hard to value it but my gut feeling is that, taking into account the mileage, I’d want to buy this for less than the asking price.

And I don’t mean it’s good for polar bears. I’ve just received a press release about the new Porsche Cayenne GTS and the accompanying photos 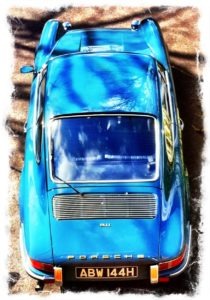 Here’s the view from my office window right now. More details on this classic Porsche 911 to follow. 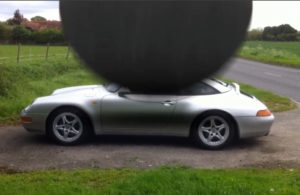 Porsche 911 gets crushed by a giant boulder

Don’t you just hate when this happens? And it’s always after you’ve just washed the Porsche, too. Fear not, no Porsches were harmed in the