Read almost any Porsche 911 buyers’ guide and you’ll be told to make sure that the Porsche Vehicle Identification Label (VIL to its friends) is present and correct on the underside of the luggage compartment lid.

If it’s missing, we’re told, then it’s likely that the car has been in an accident and the lid has been replaced or repaired.

I’m not so sure. I’ve seen plenty of very good Porsches that don’t have a VIL under the bonnet but don’t display another  signs of major accident damage/repair.

There are a number of reasons that the VIL can be missing. For instance:

1, An over-zealous owner or valeter has removed it. After all, it’s only a scruffy bit of paper.

2, The car has been restored and repainted, inside and out. Increasingly, this will be the case.

3, The bonnet has been repaired. It’s so easy to slam the lid down on poorly packed luggage and dent the panel from the inside, necessitating repainting.

4, The car has had an accident. It doesn’t take much to damage the thin and flat bonnet panel, requiring it to be replaced with a new one. Don’t assume that the whole front end has been smashed in, just because the bonnet isn’t original.

Remember, too, that there was also a VIL stuck inside the service book, so you refer to this if the one in the car is missing. It’s a useful thing to have, as it lists the options fitted to the Porsche.

Finally, I have heard of companies offering to print replica VILs, so how do you know that the one under a bonnet is genuine? 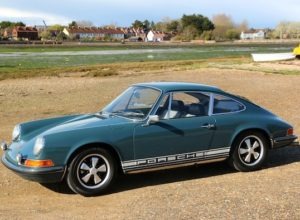 Visit the Goodwood Festival of Speed and buy a Porsche!

Are you visiting the Goodwood Festival of Speed this weekend? If you are and you’re also looking to buy a Porsche or other performance car,

It was a new Porsche once

A colleague passed me a Porsche press pack dating from 2003. Press packs were, as the name suggests, given to motoring journalists at the launch

Porsche 911 gets pushed off a cliff.

This was emailed me to me today. I’ve seen it before but it never fails to make me smile. Well, it is Friday… :