Porsche Cayman R on the Isle of Skye – Day three

Today the film crew disposed of the tracking vehicle in favour of ‘sticks’ – tripods. We revisited yesterday’s locations and reproduced the same sequences so that they could be filmed from different angles, including high up on hills and low down on the roadside. This time, there was a lot of hanging around for me, as it took a long time to set up the cameras in each position, so I was able to get on with my book (no, I’m not going to tell you what I’m reading).

It was worth it, though, as the driving sequences were fun. At first, though, I didn’t feel it was coming together – the two cars weren’t driving close enough to each other. After a while, though, everything began to gel and, in my mind, it felt better. It was interesting that, later in the day, one of the film crew told me that he found things took a while to sort out behind the camera too.

As I was driving the 964, jostling for position behind the Cayman R, it occurred to me that what we are doing with the cars is putting on a performance for the cameras. I await my Oscar!

Both me and Frank, the other driver, were exhausted by the end of the day. Driving in close proximity to another car on narrow, winding roads, with suicidal sheep on the verges demands concentration, especially while taking instructions from the director of photographer via earpieces. We were also hot; I started off in a black fleece and continuity demanded I keep the same same clothes (and the windows shut) throughout the shoot. Phew!

Still, at least we had a good supply of bottled water. And food! I’m amazed at the amount of grub the film crew devour. After a slap-up cooked lunch in a hotel, someone complained they were hungry, so a supply of sandwiches and snacks were shipped in mid-afternoon. And then there was a big evening meal! I’m taking it easy otherwise I’ll go home a porker!

Once filming finished for the day, I teamed up with Ludovic the sound engineer again. He wasn’t happy with his original recordings of the Cayman’s engine which he didn’t feel compared well with the 964 (which, I have to admit, sounds wonderful). My solution was to remove the Cayman’s engine cover to release more noise and to allow a microphone to be placed inside the engine bay.

It worked! The sound was glorious, albeit lacking the 964’s deep growl. We could hear the hiss of the induction system and a wonderful mechanical sound which was missing before. It was like driving a racing car. Unfortunately, it was as hot as a racing car’s cockpit as well. After a couple of miles we were both sweating from the heat of the exposed flat six behind our heads. 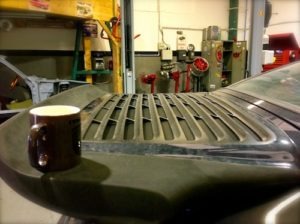 Ever wondered what that big tray on the back of a Porsche 911 is for? 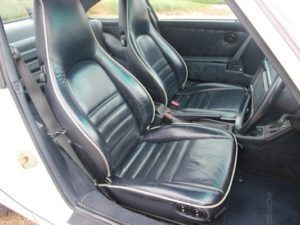 Here’s my first tentative steps into video, with the help of my ten-year-old son. Constructive criticism welcome! 🙂