Big excitement today, as we had a helicopter on set to do some aerial shots of the Porsches driving through the dramatic landscape.

The first shot had to merge with one of yesterday’s jib shots, where I drove the Cayman R past the stationary 964 with presenter Frank standing by the car, moving out of the way just as I arrive.

I began two miles down the road, which had been closed by today’s helpful policemen, Willy and Dean. I set off at a sensible 60mph, only to be told at the end by the director that I was going too fast for the helicopter, or at least too fast for them to get the required amount of footage.

Next time, I timed it perfectly, arriving at the 964 just as the helicopter swept past. The only problem was, Frank stayed firmly where he was, not moving out if the road to let me past. I realised at the last moment that he couldn’t hear me approach for the sound of helicopter so I slammed on the brakes just feet behind – and still he didn’t notice me. Could have been messy!

Finally, though, we got it right and the director of photography was delighted.

He was less delighted at our next location when our lucky run of good weather finally came to an end and the rain set in with a vengeance. It was too heavy for the helicopter’s front-mounted camera so, after waiting an hour or so in vain for it to clear, plan B was formed. One of the crew’s own cameras was taken up in the helicopter and filming was done out of the window.

We then had a stretch of closed coastal cliff road, single track, up and down hills and lots of twisty bits. Wow, that was fun! Being able to drive fast and furiously on a narrow road with blind bends was exhilarating – one of the most memorable bits of driving I’ve ever done, and much more fun than being on a circuit. I can seriously see the appeal in hillclimbs now.

That was our last day on Skye and tomorrow I set off on my 13-hour drive south. I’ve thoroughly enjoyed it here, although it’s been hard work. The scenery has been stunning, the weather (mostly) wonderful, the Cayman R sublime, the 964 entertaining, the film crew a delight to work with, and the locals welcoming. All that said, though, I’m looking forward to getting home!

There’s much talk at the moment about the Porsche 997 GTS. You see, there are still a few brand-new examples in dealers and buyers are 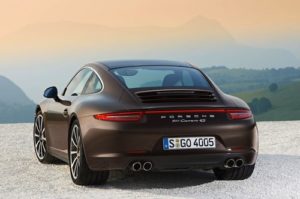 Among the excitement of the new 991 Carrera 4 and 4S four-wheel drive announcement, Porsche quietly introduced a new 911 option – a glass sunroof.

I was chatting with a colleague yesterday about Porsches and he mentioned he was thinking of buying a 996. It sounded an interesting car but