Porsche built a very special car for the 911’s 30th birthday in 1993; the 964-model 911 Carrera 4 Anniversary, also known as the Celebration or Jubi. Now, often such special editions are dismissed by cynics as little more than marketing exercises and, in its time, the 964 Anniversary has had its fair share of criticism (indeed, some of it from me, as I shall explain).

The Anniversary was a combination of the 964’s Turbo’s wide bodyshell and full leather interior, with the engine and running gear of the standard four-wheel drive Carrera 4. Built as it was during a world recession, some have claimed that Porsche had a load of wide-arch bodyshells lying around and, knowing that the market for Turbos was limited, grasped on the 911’s big birthday as a way of shifting some metal. A nice story but one that no one’s been able to prove and, I suspect, is unlikely.

What is true is that back then, Porsche hadn’t got the hang of producing cars to order and it had quite a stockpile of unsold 964s lying around (which is why today we often find that examples registered in 1993 were, in fact, built in 1991 or 1992), and the company’s finances were in a bit of a mess. Could a special edition 911 have been commissioned simply to give the coffers a well-needed boost? Maybe but, again, it’s hard to get any hard information from Porsche on the subject. It’s just as likely that the Anniversary was conceived for purely sentimental reasons – to commemorate a legendary car. I like to think so!

It does seem likely that Porsche’s finances affected the specification of the 964 Anniversary, though. The body was pure Turbo with its imposing flared front and rear wheelarches, but without that model’s fixed rear spoiler (it wasn’t needed as there was no intercooler to accommodate), while the underpinnings were just as pure Carrera 4, with a 250bhp normally aspirated engine and four-wheel drive. Contrary to some reports, the Anniversary also had the standard Carrera 4 brakes and suspension, with the exception of wider rear suspension arms to ensure the wheels filled the chunky arches.

Inside, however, there were no such compromises, if they can be called such. The Anniversary had the same opulent interior as the Turbo, with seats, dash, door panels and centre console clad in high quality leather. In most of the cars the leather was finished in a unique colour called Rubicon – a deep warm grey, while a handful had black leather interiors. An alloy-topped gearlever completed the interior trim, while most but not all cars were equipped with air-conditioning.

No special edition is complete without unique badging and the Anniversary had a subtle “911 30 Jahre” on the engine cover. On the rear shelf, meanwhile, was a small pedestal. On the back of this was a plaque with the words “Limited Edition 30 Jahre 911” plus the car’s unique serial number (more on this later). There was another plaque on the front of the pedestal with “30 Jahre 911” written in reverse so the proud driver could read it in the rear-view mirror (assuming they had exception eyesight, that is!). Finally, there were smart “911” logos embroidered into the carpet behind the rear seats; visible only when the seat backs were dropped. Moving back to the exterior, the majority of cars were painted in a unique and striking colour called Viola Metallic –  a sort of purply violet.

The other crucial unique selling point of any limited edition is that, well, it has to limited in terms of the number of examples offered for sale, thus making it rare and desirable. To that end, Porsche is believed to have built 911 (that’s nine hundred and eleven – get it?) 964 Anniversaries. I say ‘believed” because while that was the initial plan there is some uncertainty as to exactly how many were made. It’s often surprised me just how hard it can be to determine production numbers of even relatively recent Porsches – partly because the company is loath to divulge the information and partly because it seems complete records weren’t always kept.

Again, then, there are differing stories as to total numbers and, rather than mislead you, I’d rather be honest and say we don’t know the true answer. Remember, that Porsche was struggling to sell cars in the economic gloom of the early 1990s and the 964 was about to be replaced by a heavily revised new 911, the 993. Also, there wasn’t much of an attempt to market the Annivesary, with little if any promotional material and no cars were offered to the press (as was the case with the 50th 911).

There are, then, two schools of thought. First, that Porsche failed to sell the total number and, therefore, about a dozen were badged simply as “Carrera 4” and sold via Porsche’s Special Wishes department to select customers. I once dealt with one of these cars – a lovely right-hand drive Oak Green example with tan leather which was bought by the King of Greece and kept by him in London.

The other theory is that Porsche did indeed sell its full allocation of 911 special edition 964 Anniversaries and built an additional supply of Carrera 4 badged wide-bodied cars to order during 1993 and even into 1994, after the 993 was launched. If this was the case, and I suspect it was, it is thought that no less than 174 of these were made.

The majority of Anniversaries were left-hand drive cars sold in Germany (with the country code C00), but how many came to the UK in right-hand drive form? Porsches for the UK market carry the country code C16 and I long thought that there were originally 42 Anniversaries thus labelled. However, I’ve recently obtained a letter from Porsche Cars Great Britain dated 19 September 1995 (so not long after production so it’s perhaps reasonable to assume it’s correct) that states that just 41 Anniversaries imported into the country.

The letter goes onto to throw more light (or perhaps confusion) on the story because it also lists the colours of the UK cars. There were, it says, 23 Viola examples, followed by 12 in Polar Silver, four in Amethyst (a maroon shade), one in Guards Red and one in Oak Green. As mentioned, there was an Oak Green car that wasn’t an Anniversary and I’ve also heard of a Guards Red one which was badged “Carrera 4”. Does that, then, mean that Porsche also sold an Anniversary-branded car in Oak Green and another in Guards Red? I suspect not and it’s more likely that Porsche Great Britain got its facts slightly wrong – yes, even only two years after the Anniversary was made. Now you can see just how difficult it is to establish the truth about such special edition cars. The Anniversary register, meanwhile, run by the ever-helpful Thomas Englert in Germany (www.jubi.pocg.de), carries details of some 500 cars, so just over half the total production, the rest are unaccounted for.

Today, it’s impossible to say how many Anniversaries remain. I know of one UK car that has been written off and at least one that has been exported to Hong Kong. I suspect that no more than 30 remain in the country, making it an astonishingly rare beast. That said, I’ve been lucky enough to have come across two in recent months; the lovely Polar Silver example (number 517) featured in these photos plus a super-low mileage Amethyst car (which is likely to be leaving the country).

The first time I drove an Anniversary was about 13 years ago when I was beginning to make my way in the world of Porsche journalism. Back then, I reported that the extra bulk of the wide body spoilt the feel of the 964 (I owned a narrow-bodied Carrera 4 at the time), a statement which the then owner of the car still occasionally goads me about (we’ve remained in touch despite my derogatory comments). I am, then, prepared to be similarly disappointed by my latest acquaintance with this silver car.

First impressions are, naturally, good; no one can fail to be moved by the appearance of a wide-bodied 911, especially one finished in classic metallic silver. It just looks right from any angle, while the traditional upright headlamps are a nod to earlier 911s and often cited as one of the reasons people today love 964s. The lack of a teatray rear spoiler tells me that this isn’t a Turbo and the car’s lines are, I think, improved by the smooth rear with its concealed spoiler that rises up at speed.

The interior is pure Turbo with its acres of beautifully finished leather (why don’t modern Porsches have such high quality hide?). This one is finished in black which, usually, I prefer over grey but, in the case of the Anniversary, I do like the warmth and uniqueness of the Rubicon that most were finished in. Still, there’s no doubt that this is a very special place to be and exudes the solidity which older 911s, 964s in particular, are renowned for.

When I turn the key, though, the Turbo trim is at odds with the car’s normally aspirated engine note; I’m immediately reminded that I’m in a Carrera, and the diff-lock knob on the centre console prompts me that’s it’s a four-wheel drive variant, at that. Now, some purists knock Porsche’s first Carrera 4, saying that it understeers excessively, but I’ve never subscribed to that view. Yes, in standard guise, there is more understeer than a keen driver would want but it doesn’t take much geometry tweaking to transform the handling. I suspect that this car has been treated to some such geo magic because as I throw it through corner after corner, I soon forget it’s a wide-bodied 911 and enjoy its agility and delicate steering. Yes, there’s still some understeer – which is no bad thing – but it’s by no means excessive, while the fact all four wheels are being driven only gives me the confidence to push the car harder on these damp autumnal roads. My preconceptions about the wide-bodied 964 vanish as quickly as the smile spreads across my face.

If you own an Anniversary, you’ll have another good reason to smile. The last couple of years have seen values of all 964s rise, with rare models such as this one being particularly sought after around the world by collectors wanting to add to their portfolio. All in all, then, a good reason to celebrate.

Where to get a Turbo rear spoiler for a Porsche 997

I’ve just had an email from someone looking for a Turbo-style rear spoiler for a 2005 Porsche 997 Carrera. Well, one option would be source 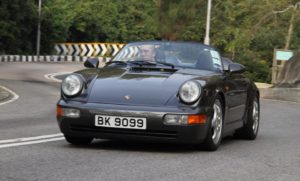 I have a good friend in Hong Kong, Kevin Yeung, who is a huge Porsche fan. Among other cars, he owns the last off the 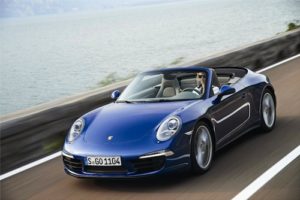 Porsche has just unveiled the new 991 Carrera 4 at the Paris motor show, which was no surprise as the car had already been announced.