A lot has been written about the latest Porsche 991 Targa and, I have to admit, I do like the way the new Targa apes the appearance of the classic 911 Targa, with its wrap-around rear window. It’s a good looking car in a retro way.

However, what I don’t like about the new Targa is the overly complex way the roof is opened. The entire rear window opens, the Targa panel drops down under it before the window returns into place. Sure, it’s a triumph of engineering but it’s not an elegant solution and, unusually for Porsche, it’s a case of function following form, rather than the other way round. The original Porsche 911 Targa was styled that way because the roof panel was designed to be lifted off and stored in the boot. Of course, today’s buyers wouldn’t accept having to do that, so it’s illogical to reuse the old styling and then create a clumsy method of opening the roof.

Far better, to my mind, was the glass-roofed Targa that debuted with the 993 and was also used on the 996 and 997 Targas. Here Porsche completely reinvented the Targa concept for the 1990s with an elegant and intelligent concept.

Essentially, this consisted of a huge glass roof panel which, at the touch of a button, slid back under the rear window to give a large aperture for the sun to stream through. When the glass roof was closed, the cockpit had a light and airy feel, unique to a 911, while an electrically operated sunblind could be drawn over when required.

It was a brilliant solution which got better with the 996 when Porsche added an opening rear hatch into the equation. Yes, a 911 hatchback! This allowed access to the parcel shelf and rear seat area which made it simple to load luggage into the back of the Porsche. Porsche 911s have always been practical sports cars, this clever addition made the 996 and 997 Targa even more useable on a daily basis!

For reasons I’ve never understood, though, these 911 Targas were never big sellers, with buyers increasingly choosing a full Cabriolet in preference to a Targa. Porsche once told me that Targas accounted for just 5% of UK 997 sales.

Sadly, then, that must have been the reason for Porsche discontinuing the glass-roofed 911 Targa. However, they remain great Porsches with a loyal following, and well worth considering if you are looking for a 911 Targa to use on a regular basis.

Filming started today here on the Isle of Skye. The forecast was for rain and I’d been warned there’d be a lot of hanging around, 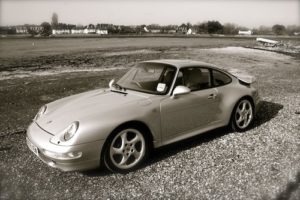 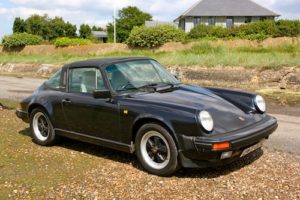 I’ve just been asked to supply a valuation for a Porsche 911 3.2 Carrera. It’s a common request for an agreed-value insurance policy. Insuring your