A day in the life…

The great thing about this job, is that no two days are the same. But if there’s such a thing as a typical day, perhaps this was it. Here’s a brief overview of what I’ve been doing.

Up at 6.45am to get the kids off to school – they start at 8am which gives me useful time before things really kick off at 9am to reply to the overnight deluge of emails, and to check on Facebook and Twitter.

Then I sat down to write my monthly column for GT Porsche magazine, looking at values of Porsches. This month I’m looking at 993 values, which are always interesting.

As ever, though, there were emails and phone calls to interrupt me. I know you’re not meant to let these interrupt other work but people do like to get a quick response these days.

Emails of note included a dealer selling an early 997, one from eBay Motors asking me to take out an 18-month contract (yes, right), one from someone setting up an interesting new website putting car sellers and buyers together, and another from a friend in Hong Kong enthuses about his Ferrari (I have to admit, it does look amazing), plus various enquiries about Porsches. The postman brought a letter (remember those?) from Companies House reminding me to do an Annual Return, which I passed straight to the accountant.

Late morning, I had a phone call from someone wanting to view a 964 Cabriolet (pictured) that we have for sale. As he wanted to come early afternoon, I grabbed a quick bite of lunch before giving the car a quick dust down. After a good chat, a look around the car and a test drive (sadly with the roof up as it was drizzling), he agreed to buy it and went off a happy man – his first 911.

All our cars are issued with 12-months’ MoT and given an independent suspension by AW Motor Sport, so next on the list was to arrange for the 964 to go through this process. It also needs a couple of minor oil leaks sorting and a brace of rear tyres fitting. While there, some finishing touches were needed sorting on a lovely 996 which is being collected by its new owner at the end of this week.

I was then excited to get a phone call from someone with a rare Porsche 964 Anniversary – one of the wide-bodied cars made to commemorate 30 years of the Porsche 911 back in 1993. It’s hard to value such a car but we had a good discussion about price and I agreed to take on the sale. The only problem is that the car’s front bumper has been removed for painting and needs to be replaced before it can be moved. A quick call to our bodyshop guy confirmed it’s a ‘pig of a job’ but three 10mm bolts will hold it firmly enough to drive it to our workshop. Watch this space for more details on this car.

In between all this, I’ve been trying to source a Porsche 996 Carrera 4S for a photoshoot on Thursday (can anyone help?), and the kids’ freshly repaired MacBook has been delivered. I had planned to get down the gym but maybe tomorrow…

All in all, a great day. 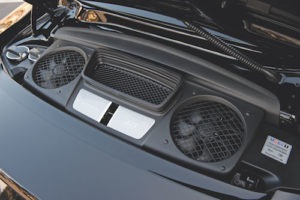 Porsche 911 engines – are they better hidden away?

The new Porsche 991 has upset a few people because you can’t see its engine at all. Open the rear lid and you’re met with 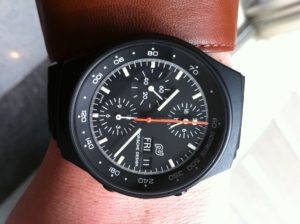 I was chatting to a friend recently about watches and the subject of the Porsche PDO1 watch came up. Now, I’m not a fan of

Porsche Cayman R on the Isle of Skye – Day four

You know those moments on Top Gear when Clarkson’s driving around, talking to a point somewhere in front of the passenger seat? Well, that’s what