Changing the colour of a Porsche 964 Carrera 2

Last summer, I handled the sale of a very special Porsche 964 Carrera 2 belonging to John and Paula Boggiano. It’s a car they’d owned twice over many years and lavished much time and money on it, to ensure it was one of the best 964s Carrera 2s around, and it was featured in several magazine features.. Despite it being a much-loved Porsche, the couple decided to sell the Guards Red 964 to make way for a brand-new Boxster, which is why it came to me.

It didn’t take long to find a buyer for such a special 964 Carrera 2; a gentleman who was looking for a car to complement his silver Porsche 993 Turbo. He was delighted with his purchase and, as is often the case with our customers, we have kept in touch.

John and Paula were keen that their pride and joy go to a good home, and I knew that it had done and that their old Porsche would continue to be cherished. However, even I was surprised to receive an email from the new owner telling me he’d had the 964 Carrera 2 repainted and the engine detailed over the winter.

That would be surprising enough, as the Guards Red paintwork was in good condition, but the Porsche has been repainted silver to match its owner’s 993 Turbo.

Normally I’m not a fan of changing a car’s colour as it distracts from its originality and has to be done really well to cover all traces of the original paint – not an easy or cheap job.

However, in this case the work has been done by Precision Porsche, a company which I know always does exemplary work. You can see more photo of the 964 Carrera 2 on Precision Porsche’s website.

Now, the only recognisable part of the Porsche is its distinctive numberplate. I was concerned that the Boggiano’s wouldn’t be pleased to see what’s been done to their old car, but John was delighted to see the photos, saying that the car looks fantastic and modern. The only thing he wasn’t sure about were the red calipers – not correct for the car but I think they offset the silver nicely.

Far from spoiling the car, this respray has improved it and added to the car’s value. Silver 964s are few and far between and are always in demand for the simple reason that silver is a great colour for a 911 – ignore people who say that silver cars are too common, it really does work with the 911 shape.

If you’re looking for a Porsche 964, we usually have some in stock. Please click here for details. 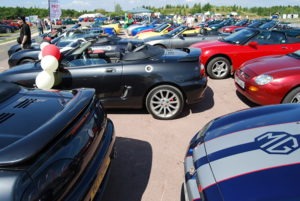 Twenty years of the MGF

First of all, apologies for the lack of Porsche content! Many years ago, I was editor of an MG magazine and have happy memories of 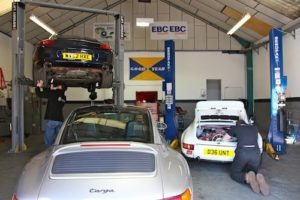 We are teaming up with Porsche service specialist AW Motor Sport and opening our doors to Porsche owners on Sunday 12th August. The informal